I like to share links to interesting articles, blog posts and websites on Twitter. Due to Twitter’s 140 character limit, though, I need to shrink the links so I’ve got more room to include my comments. There are a number of services available to handle this but they usually involve switching over to another website to shrink the link or using a toolbar that tries to re-tweet the article with additional info I don’t want. That’s when I discovered Power Twitter which takes care of this and offers much more.

Lots of Useful Twitter Features, Simple to Use and Did I Mention It’s Free?

Power Twitter works within your browser adding a layer of features like inline media (displays photos, link descriptions and videos), the ability to post a photo or shorten a link without leaving the page as well as some useful search features. Currently, versions are available for Firefox, Safari, Google Chrome and Grease Monkey. Notably missing is a version for Microsoft Explorer.

Power Twitter adds quick links (see image above) to let you easily post a photo, shorten a link or post your mood. I can’t imagine using the latter but the first two are very useful. Power Twitter has a Settings section that lets you choose your favorite photo sharing service without leaving Twitter or opening a new browser tab. Currently included are:

Rather than clicking on a link, Power Twitter displays the image or video right below the tweet. It also offers a little information about the link in a Tweet. It’s not flawless as some sites display as “Unknown Site” but the links still work. 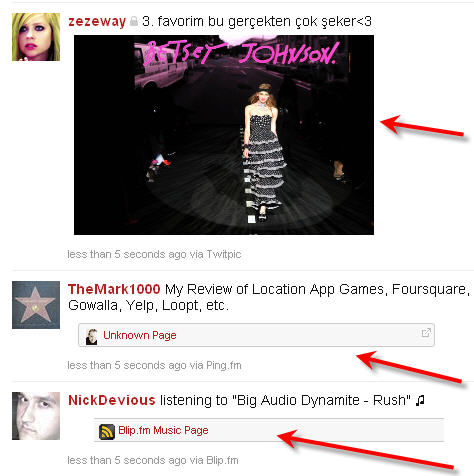 This is a time saver for me as the preview helps me decide if I want to click over and see the full-size image, watch the video or explore another site.

Have you ever wanted to find a post by a particular user on Twitter? Power Twitter adds a new search window to each user’s profile that allows you to search on a particular phrase or keyword. It works quickly but with limitations. It only appears to be able to search fairly recent posts but that’s the case with Twitter’s general search feature, too. Here’s how it looks on my friend Kate Buck’s profile.

Power Twitter also adds a link to let you search for @replies on the user. Twitter already provides this but I suppose this saves you from scrolling down the page.

Power Twitter was simple to install on Firefox. I haven’t tried it yet on Safari or Chrome. Once installed, it adds features to Twitter on the browser page. It’s settings tab hides near the bottom right corner of your browser and is very unobtrusive. You’ll need to authenticate Power Twitter with Twitter which involves clicking on a link in Power Twitter’s control panel and approving it’s access. You’ve probably done this before for other applications on Twitter or Facebook.

When I installed Power Twitter last week, there was a problem with the authentication process but it’s been resolved. Everything works fine now.

Are you already using Power Twitter? What’s your take on it?

UPDATE: Twitter is rolling out a new inline media feature that will somewhat render Power Twitter obsolete. Get the full story here.