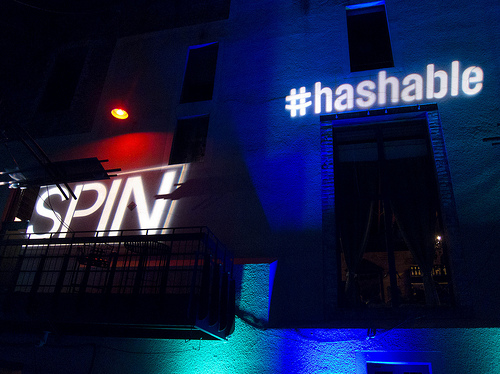 One of the buzz apps I discovered at South By Southwest last month was Hashable. What’s Hashable? The official description is:

Since it seemed like all 17,000 attendees as SXSW were armed with smart phones, laptops and ipads, it was the perfect environment to test out Hashable. Instead of swapping business cards, all you had to do was tweet the other person’s Twitter handle along with #justmet and @hashable and a tweet with a link to your contact info shows up instantl on Twitter (there’s a way to do this privately, too).

Besides sending out your own virtual business card, you can use Hashable to make introduce people through Twitter or via email. Granted you can do this via any tweet but with Hashable, you can see if the two people actually connected. And if they didn’t, Hashable will send a reminder after 5 days. Send a Tweet with two friends Twitter handles and the hashtag #intro and include @hashable and this is what both will see in their @mentions stream:

When either party then clicks on the link within the intro tweet, they’re taken to an “Icebreaker” page like the one below where they can find out more about the other party and, if they choose send out a request for a meeting or call. (Click to see the full-sized image). 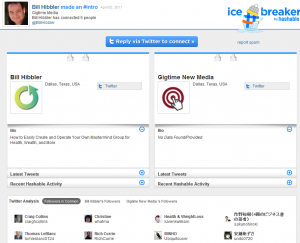 Beyond introductions, you can use Hashable to mention and track meetings, meals, thank-you’s or any other interaction. Hashable has a suggested list of hashtags but you’re free to make one up, too.

Hashable is still in public beta testing and it’s free to use. Whether or not it catches on, we’ll have to wait and see but it’s an interesting way to stay connected with people and track your relationships. There’s a point-based system that rewards usage with standings on a leaderboard similar to what apps like Foursquare use to encourage participation.

Will Hashable replace the business card? Probably not any time soon but does introduce some interesting possibilities. Do you think it will catch on? Do any ideas come to mind on how you might use Hashable? Post a comment below and let me know what you think.