For the past several months, I’ve been heavily researching RV’s in order to buy a motorhome that I will travel in full-time in 2020. I’ll talk more about my plans and what I’ve learned in a future post but, right now, I want to alert you to a scam I discovered that’s been going on for at least two to three years.

Tomorrow, I will be interviewed on syndicated The RV Show USA which is available on the radio, YouTube, and via Podcast. If you’re interested in RV’s, I highly recommend you tune in. You can also view the interview on YouTube by clicking here. The link will take you directly to my interview but, if you have time you’ll want to check out the entire show and subscribe to the show on YouTube.

I was specifically looking for a used Class A mothorhome. Class A’s are the RV’s that look like a bus. With my research, I’d narrowed down my search to coaches from Monaco, Tiffin, Holiday Rambler, and Newmar and was looking at both Diesel and Gas mothorhomes.

Along the way, I spotted a 1999 Tiffin Allegro diesel model on Craigslist in Waco. The listing contained pictures that looked like they were screeenshots from an iPhone so I wrote to the seller to ask for more photos. About a week later, I got an email from the ‘seller’ Dr. Debbie Hudak, who told me she needed to sell the coach because they’d bought another RV and didn’t have room to store both. She told me that she and her son had tried selling it by listing it on Craigslist in multiple cities across the US. When that didn’t work, she put it on a consignment lot called Kuki Auto Consignor. The price was $11,000, which was a bargain. Typical retail on this coach is $23,000 to $28,000. It was a good deal but it wasn’t quite ‘too good to be true’. Also, the doctor wrote to me using an Advent Health Care company email address rather than a Gmail or Yahoo address which are more commonly used by scammers.

She explained that Kuki Auto Consignor would accept payment and hold the funds in escrow and would then deliver the RV and I would have 7 days to look it over and, if I chose, have it professionally inspected. If I was satisfied, I’d keep it and the seller would get the payment. If I didn’t, KAC would pick it up, at the seller’s expense, and return it to their lot. Kuki offers cars, RV’s and boats.

I’d never heard of such a service so I went to Google. On Google, I discovered posts on a variety of car and RV discussion boards going back as far as 2012. In these posts, others asked if Kuki was legit and there were several posts from supposed buyers that had satisfactory purchases. The posts and reviews looked legit and were from what appeared to be regular members of the sites rather than one-time or anonymous posts.

I then looked at Kuki’s website. The site told the story of a big company that originally started in England with lots in London, NYC, LA, and more. The listing for this particular coach showed lots of photos and details. The website also had a phone number and live chat feature. When I called the phone number, it was answered by a voice mail using a robot voice which had the usual voicemail maze but the call ended telling me they had high call volume and directing me to use the chat feature. I did get a response on the chat window. Unfortunately, I can’t show you the website because it’s since been taken down.

The problem here is a supposedly large company like this not having any Google or Yelp Reviews. That never happens. I then started taking a closer look at the retail locations shown on the website and searched them using Google Maps. For every location, the address led to the type of office buildings that lease small offices to dozens of businesses. Not the type of buildings that would accommodate a large volume of vehicles. So I knew these weren’t real consignment lots.

At this point, I’d realized for quite some time this was a scam but kept digging deeper to see what I’d find.

Use The Wayback Machine

My next stop was the Internet Archives aka The Wayback Machine. This is a great free tool anyone can use to research the history of a website and see how that site has evolved over time.

As you can see from the image above, the Internet Archives has records of KukiAuto.com dating back to 2009. To see what any stored images, click on a year and then on any dates in the calendar marked in green.

First I looked at a capture from 2010 which revealed that Kuki had once been a car sales site in Italy.

Looking at later captures revealed that KukiAuto.com’s domain had been for sales in 2018 for $388. So it looks like the scammers purchased it so if anyone did a very basic search, without going as deep as I did, it would appear that they were dealing with a company that had been around for several years. 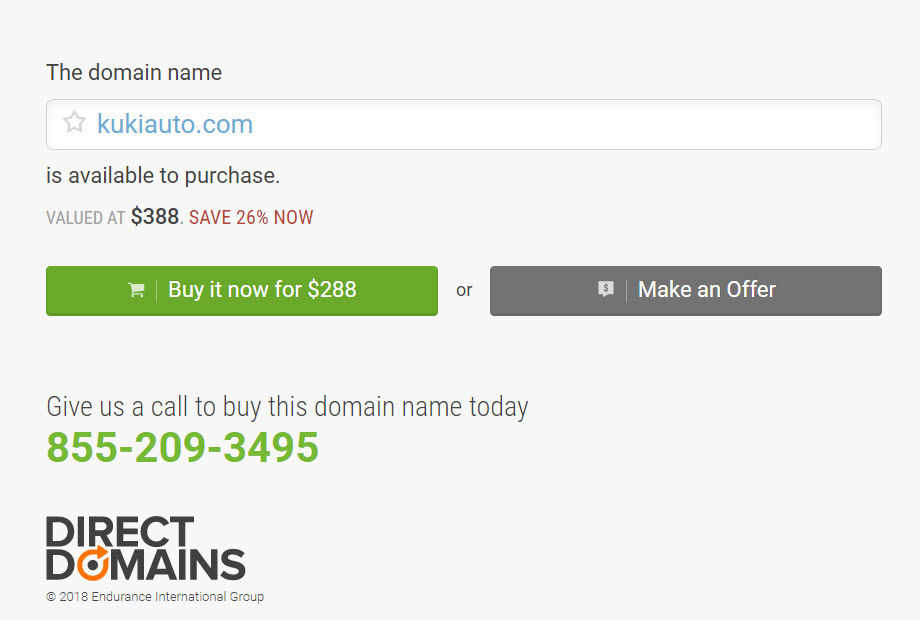 Use Google Maps to Check Addresses

Kuki sent me a bill of sale outlining how the process would work and provided a Citibank account number to wire the money to. That document had an address in Miami. Googling the address led me to yet another office building with dozens of tenants. The address did not contain a suite number. I contacted Citibank but they wouldn’t provide me any information since I wasn’t an account holder. Next, I phoned the Better Business Bureau in Miami and they had zero records of Kuki or the parent company.

One key element the scammers used is having the seller being a doctor with, what appeared to be, a legitimate company email address. She told me she lived in Atlanta. A quick search on Google revealed two doctors named Debbie Hudak but neither was in Atlanta. It’s nearly impossible for a practicing physician in the US to not show up on review sites. Her email address used adventhealth.doctor. Typing that domain redirected me to adventhealth.com but a search of the staff showed no Dr. Debbie Hudak.

Do a WhoIs Search to Check Ownership of the Website

So my next step was to do what’s called a WhoIs search. A Whois search will show you the owner and contact info for any website as well as how long it has been registered. Domain owners have the right to keep this information private. If they do, you’ll see the ownership as Domains By Proxy, or see something like “Redacted for Privacy”. There are legitimate reasons for maintaining privacy but you will rarely see this used for a public company or professional like a doctor.

The best way to do a WhoIs search is to use Icann and the search is free. As you can see below, the WhoIs search for adventhealth.doctor had the ownership info redacted for privacy. I did a similar search for KukiAuto.com and it also showed a private registration. That domain has since been pulled entirely from Icann’s records.

What the scammers did here was fairly clever. They took a legitimate company, Advent Health Care and registered that the .doctor extension which wasn’t owned by Advent Health Care. They then setup the domain to automatically forward to AdventHealth.com so it would appear to be legitimate. But they maintained control of the email addresses and setup debbiehudak@adventhealth.doctor. Advent Health had no way of knowing this happened (I’ve since notified Advent Health of the issue) and it adds some legitimacy to the scam as most people trust doctors.

After this happened, I posted the story on a number of RV sites and RV owner groups on Facebook. Some reported they’d been approached by the same scammer within a day or two of reading my post. Others told me they’d seen this same scam, with the same Doctor and Kuki scenario. Someone else pointed out something that I’d missed and wanted to mention as something you can easily look for.

Looking back on that original search on Kuki Auto provided some clues I’d missed. The graphic below shows two of the listings that came up when I searched Kuki Auto Consignors. If you look at the main headline for each listing, it appears that the search results is showing posts on RVnet, a popular RV discussion site. However, if you look at the actual web address, you’ll see that these posts aren’t on RV.net but a site called elacuario.org.

El Acuario is actually a site in Colombia that sells aquarium supplies. What the scammers did was hack into elacuario.org and create a page that looked exactly like RV.net discussing how great Kuki Auto Consignors is. Apparently, they’ve done this on dozens if not hundreds of websites and the owners of those sites are completely unaware that these pages existed on their site.

So if you’re doing any kind of research on a dealer and see what appear to be legit reviews, always look closely at the domain names to make sure you’re actually on the legit car or RV site and not a clone operating under someone else’s domain that’s been hacked.

I reported this scam to the FBI’s Internet crimes division and posted a warning on RipoffReport.com and it looks like law enforcement either pulled all these fake domains or the scammers simply started doing business under a new domain. I suspect these scammers are operating far outside the US and are unlikely to get caught. But at least you’ll know how to avoid getting scammed yourself.